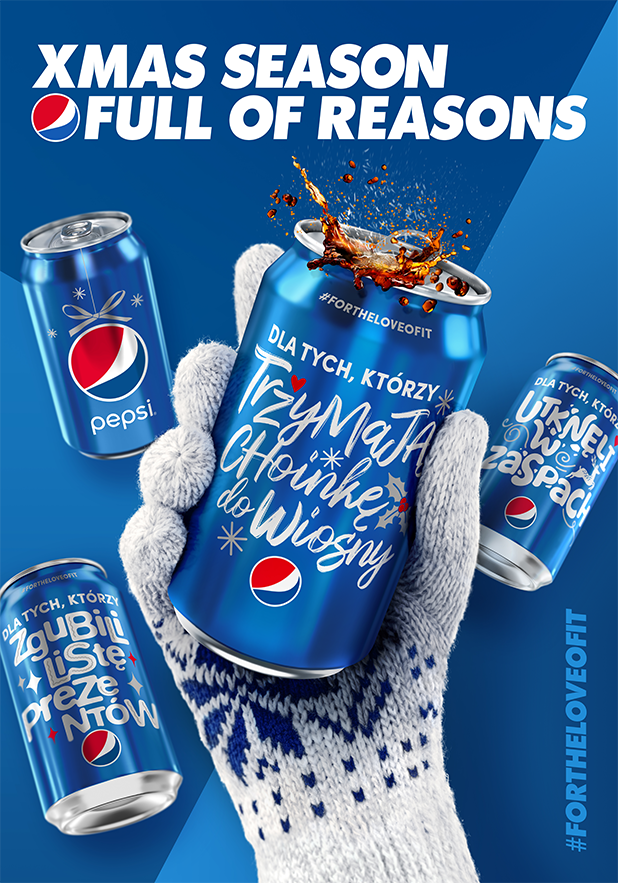 Why celebrate
Christmas,
if not for gifts?

With Pepsi Xmas
season is full of reasons
to celebrate! We convinced
the consumers from 25
countries that it’s true
in our last Pepsi Christmas
and New Year campaign.

Millennials and Generation Z - young and moving with the times, but still attached to tradition. How to convince them this year to believe in Pepsi instead of Santa?

There are plenty of reasons to celebrate Christmas with Pepsi, but we needed to be more specific.

In our campaign we used a claim: "Xmas season full of reasons to celebrate with Pepsi" showing a variety of justifications for the celebration.

It is worth reaching for a cooled can of refreshing bubbles when we have the best Christmas outfit and we shine more than a Christmas tree. Or when we make a snowman out of nothing (there is usually no snow during Christmas). And when the gift we gave someone was a hit. And also at the weekend, because it is always an excellent opportunity to celebrate.

We presented these reasons in the form of 6 and 3-second films with Pepsi blue elves in the lead roles. Other reasons appeared on TVC which we adapted, on banners and Pepsi cans from the limited series "For those who celebrate in their own way."

All materials were prepared so that the campaign can be easily located in the entire region - 25 countries of Central and Eastern Europe.

Such a campaign is our
agency's reason to celebrate
with Pepsi!